All Collections
New User Info
Other
Ideas Module in MeetingPulse

Run brainstorm sessions with your audience. Attendees submits ideas and then the audience votes and comments on them.

Written by Jasmin Murcia
Updated over a week ago

Use our new Ideas module with upvoting!

In the Ideas module, you can set up a separate brainstorm for your topic. Then your audience can submit their own solutions or suggestions to the topic. They can also vote on the ideas. 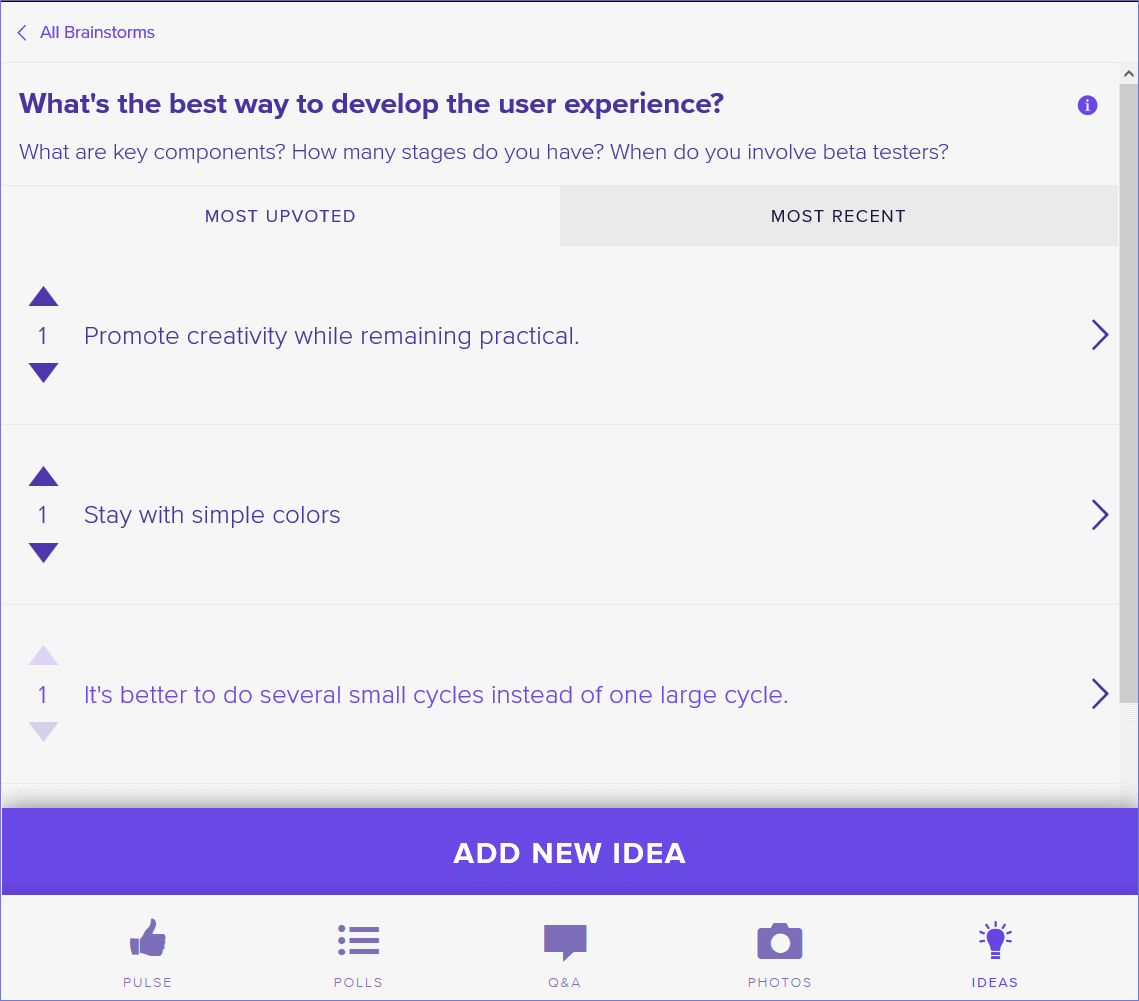 It’s easy to do brainstorming on more than one topic. Just set up a separate Brainstorm for each topic.

To keep people focused, you can hide the other brainstorms until you’re ready to move on. (It’s also just fine to have more than one brainstorm going on at once.) 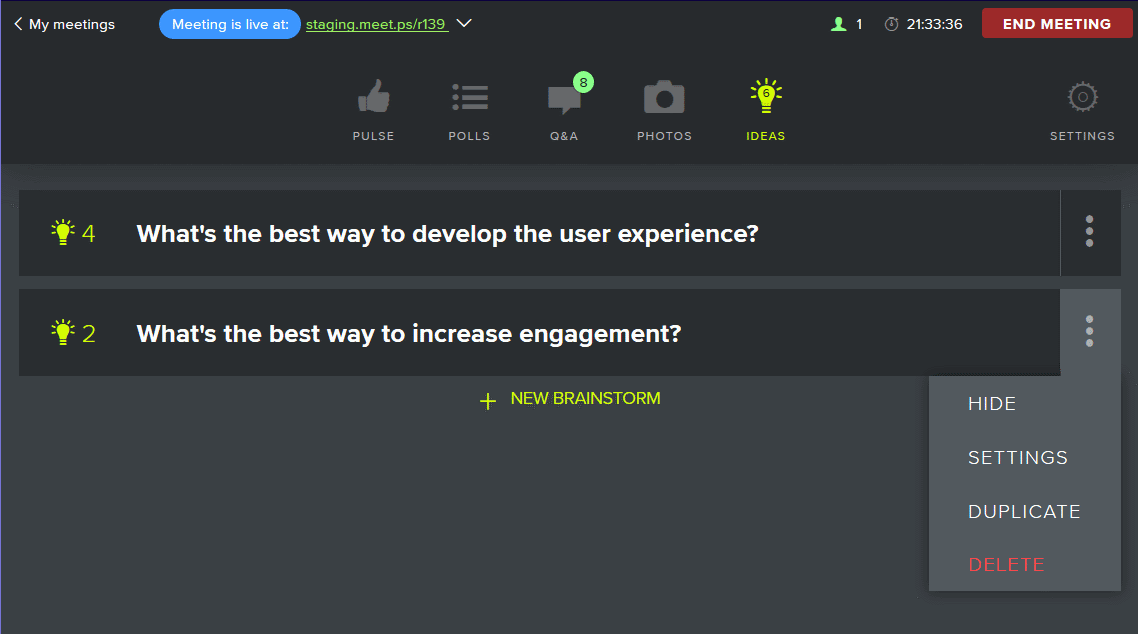 When you create a new brainstorm, you have several different options. Begin with a question or title for this brainstorm. You can include more details in the more information section (collapsed in attendee view by default.) 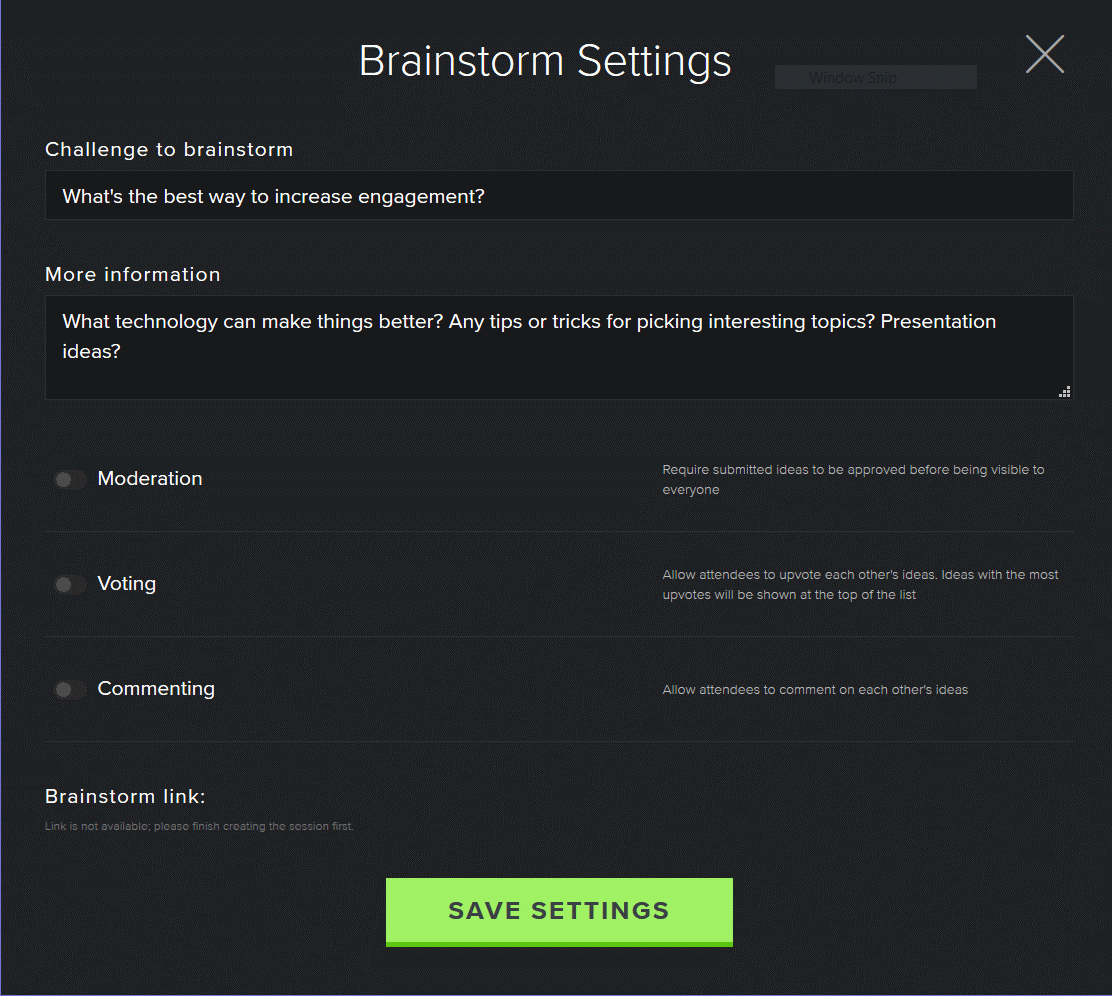 As in Q&A, you can use moderation to have control of which suggestions go out to the group. Upvoting is a great way to get feedback. Downvoting is an option to use with care. Sometimes people get discouraged if their idea has many negative votes (instead of no upvotes.)

Comments are great for expanding on ideas, and for the presenter to respond.

To moderate ideas, go to the Submitted tab and click “Approve” or “Reject”. By rejecting some suggestions, you can keep people focused on the subject at hand. 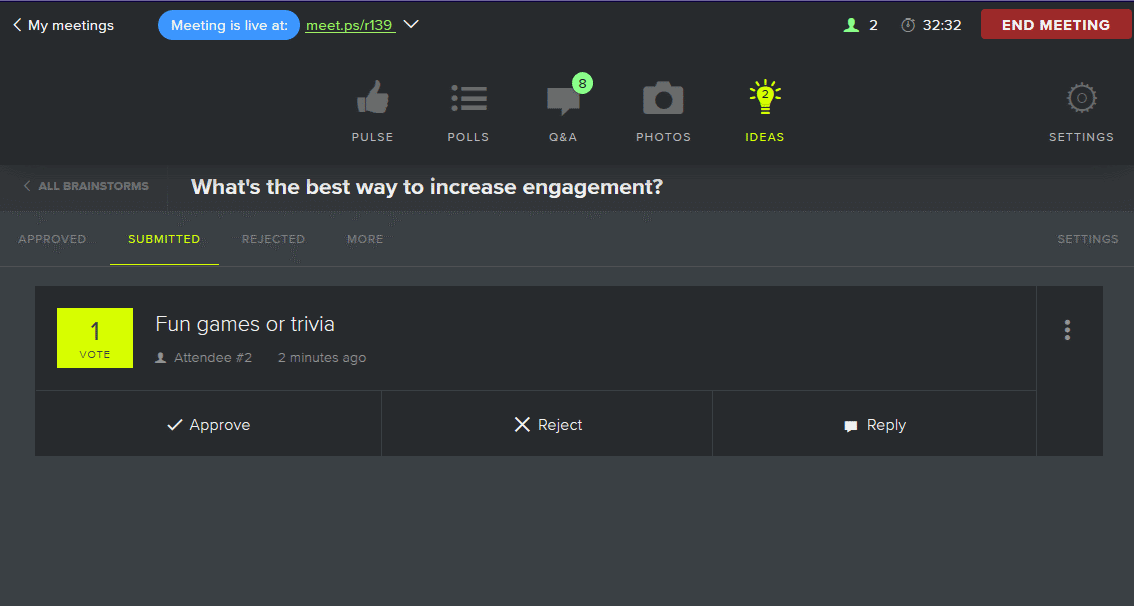 Once approved, an idea goes out to the whole audience. When you are finished discussing that idea, you can click “Done” to put it in a collapsed folder. Alternatively, if it’s a suggestion you don’t want to consider right now, you can click “Later” to find something to follow-up on. You can also un-approve a suggestion if you approve it by accident. 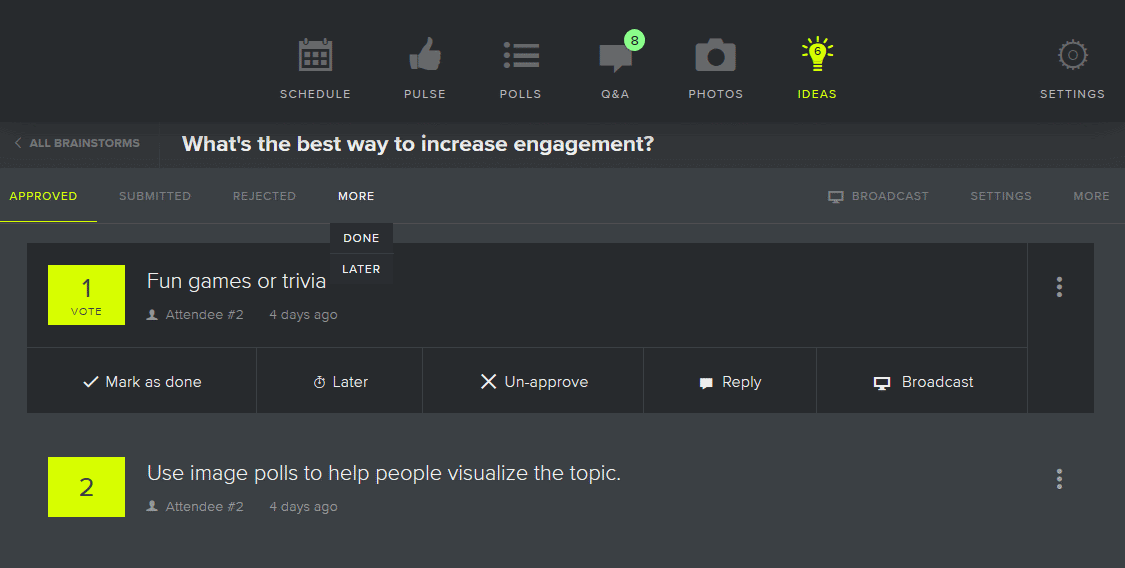 Replies are a great way for the presenter to ask for more details from the person who suggested the idea.

You can also get a CSV of the brainstorm by clicking on “MORE”. Settings allows you to re-open the brainstorm creation window so you can rename it or change the options.

Just to the left of the Settings button, is Broadcast. If you have a shared screen (like a projector), you can use the Broadcast view for the brainstorm to show the most recently submitted ideas. 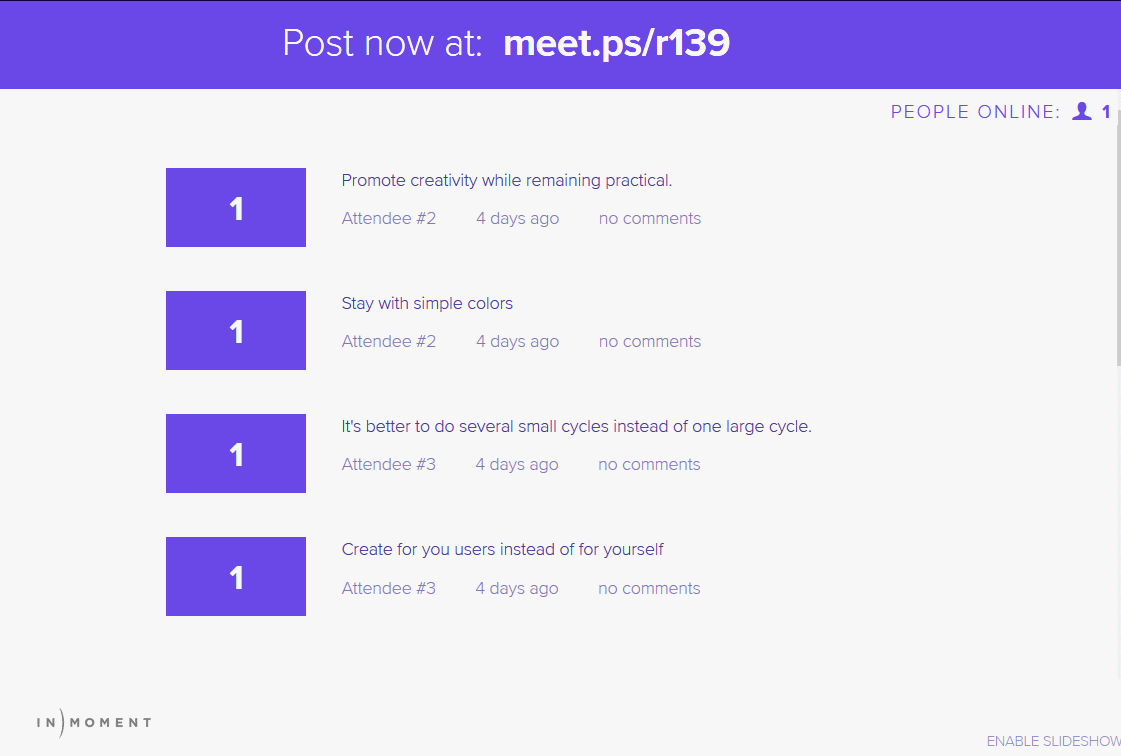 You can use the Broadcast button on a specific Idea to focus on it.

That will update the Broadcast view automatically: 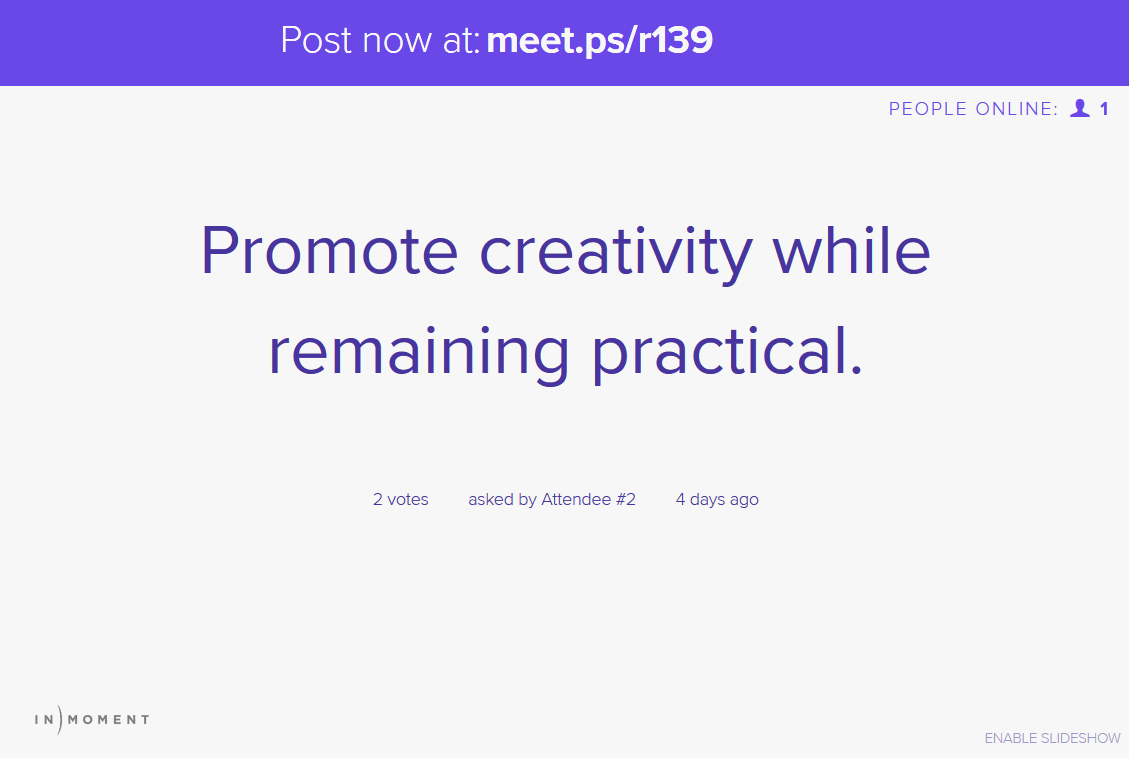 Use the print-friendly report to create a PDF to share.

The print-friendly view includes a list of the ideas submitted, along with the number of votes it got. 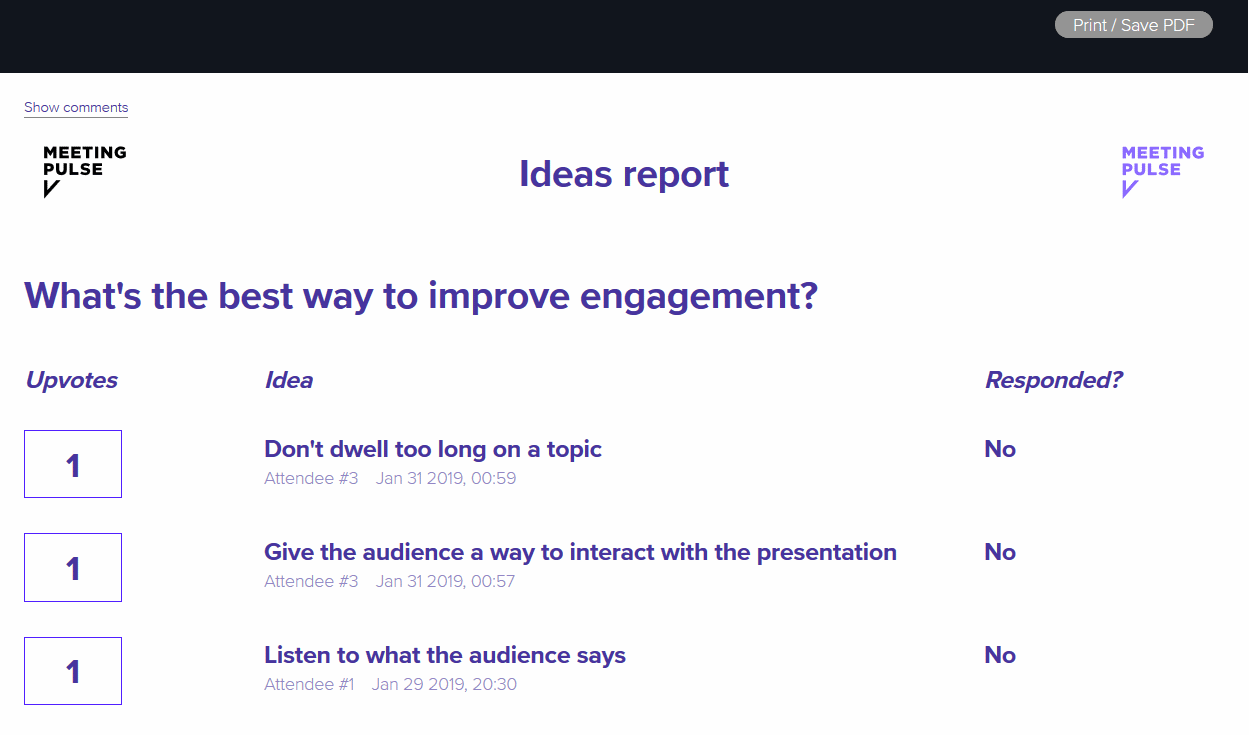 Use the new header that includes a count of ideas.

Each status of the ideas has a count of how many ideas are in it. This makes it easy to notice when new ideas are submitted and need to be approved.

The “Later” counter lets you monitor if there is time at the end of the session to go over the ideas marked “later”.

Use the speaker view (available for Q&A and Ideas) to avoid the facilitator to get distracted by the other features.

The speaker will see all the ideas that have been approved by the moderator. They can mark the ideas as Done or Later, which will remove that idea from their view. 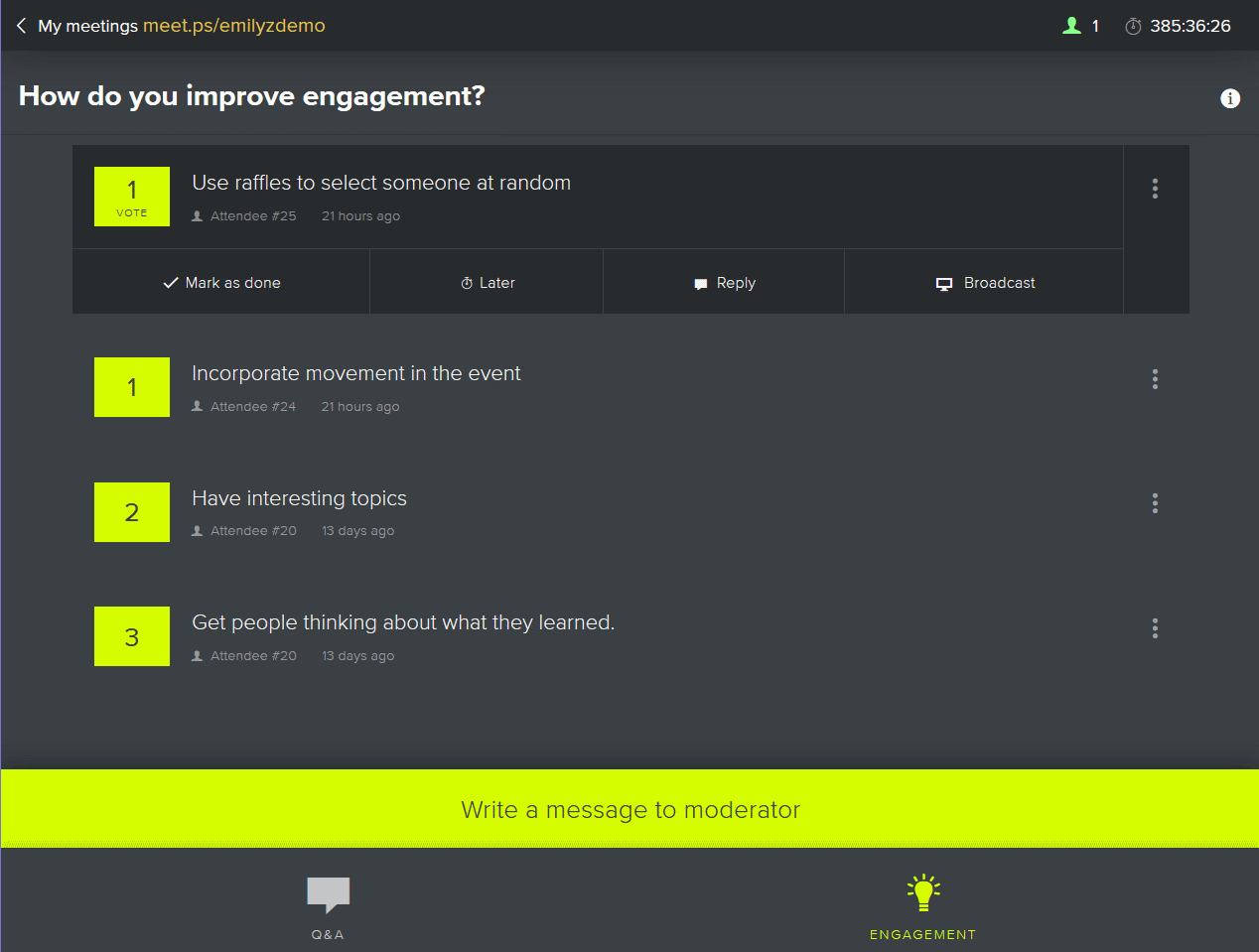 The speaker can also reply to individual ideas or even edit them. The broadcast button highlights that suggestion in the Broadcast view (hiding all the other suggestions.)

The speaker and moderator can communicate through private messages. These messages are listed at the top of the brainstorm. 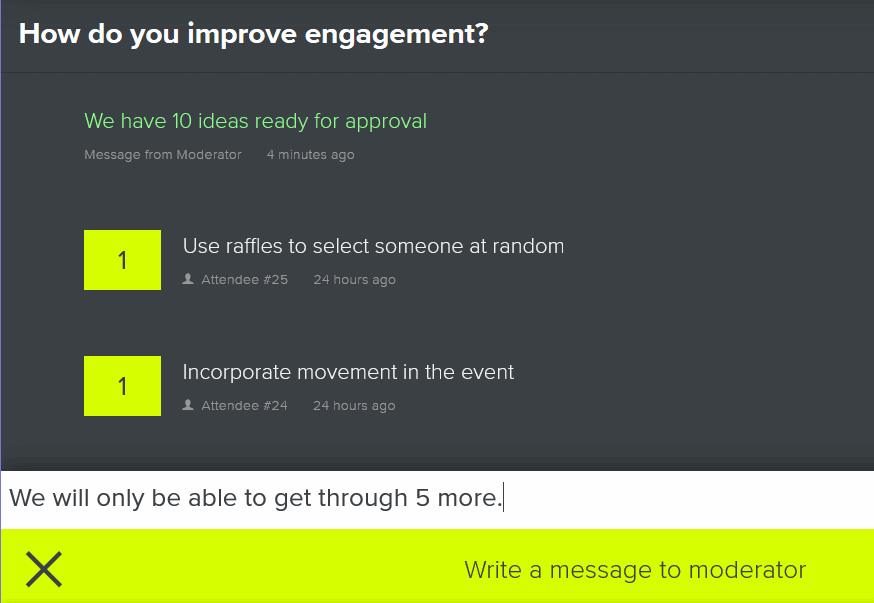 Next, you need to share the brainstorm with the speaker.

Pin the brainstorm to the bottom nav bar to make sure the audience participates in your most important brainstorm.

In the Brainstorm Settings, you can click the Add shortcut to nav button. 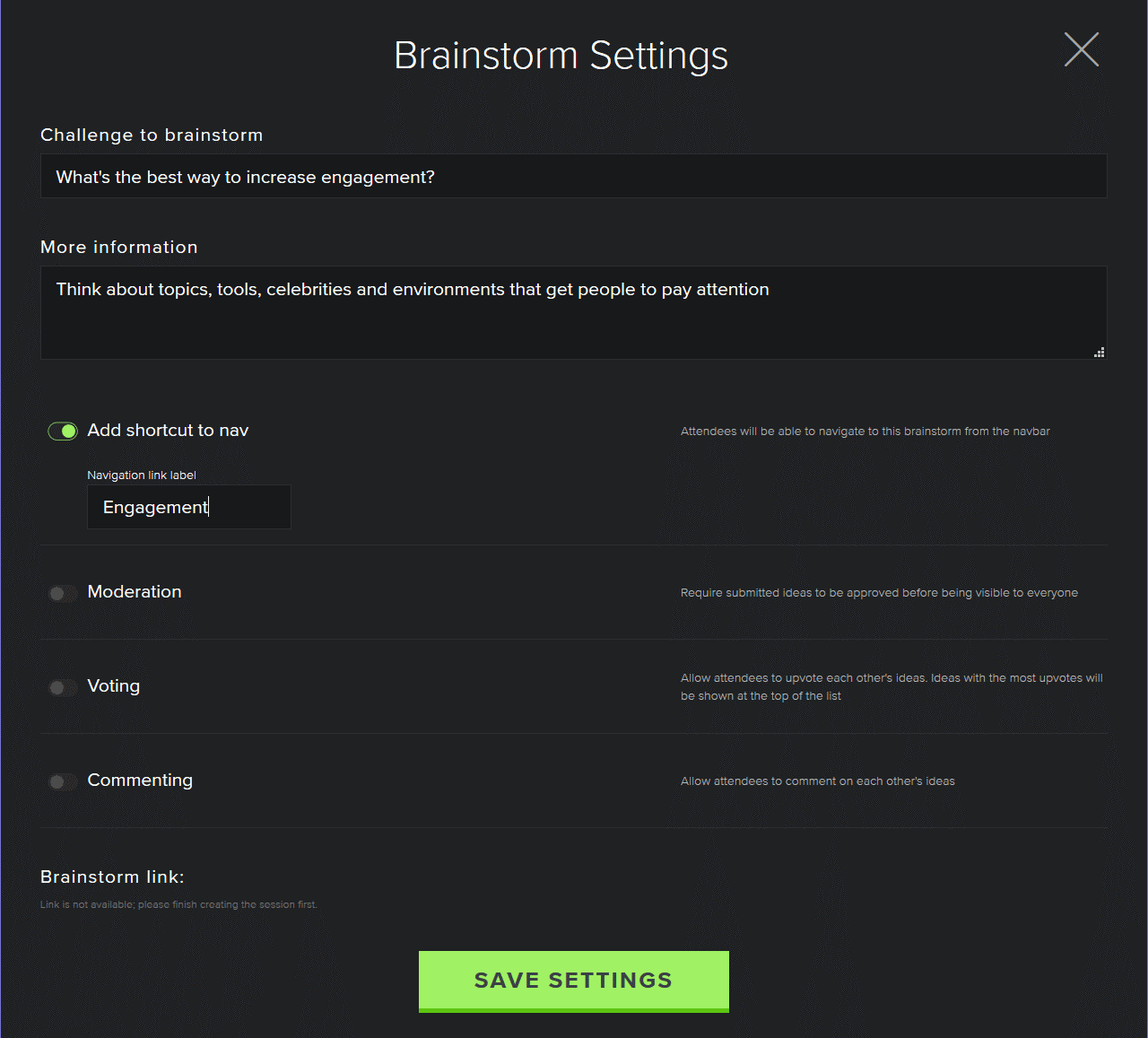 Enter a short label, less than 16 characters. Now your audience will see that label on the bottom nav bar! “Engagement” has replaced Ideas. 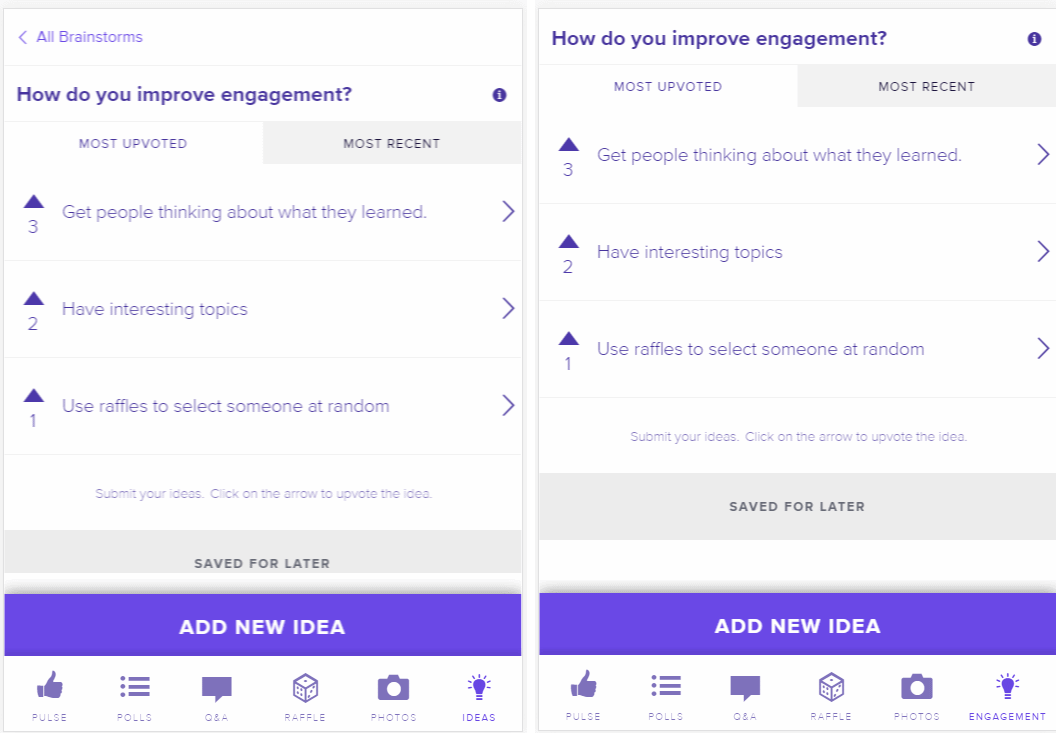 Use Focus to push the attendee’s devices to show that brainstorm.

Simply click on the Focus button for the brainstorm and the audience will be brought directly to that idea.

Ideas: Brainstorm title in B

The new Broadcast view includes the link to the meeting and the question text. 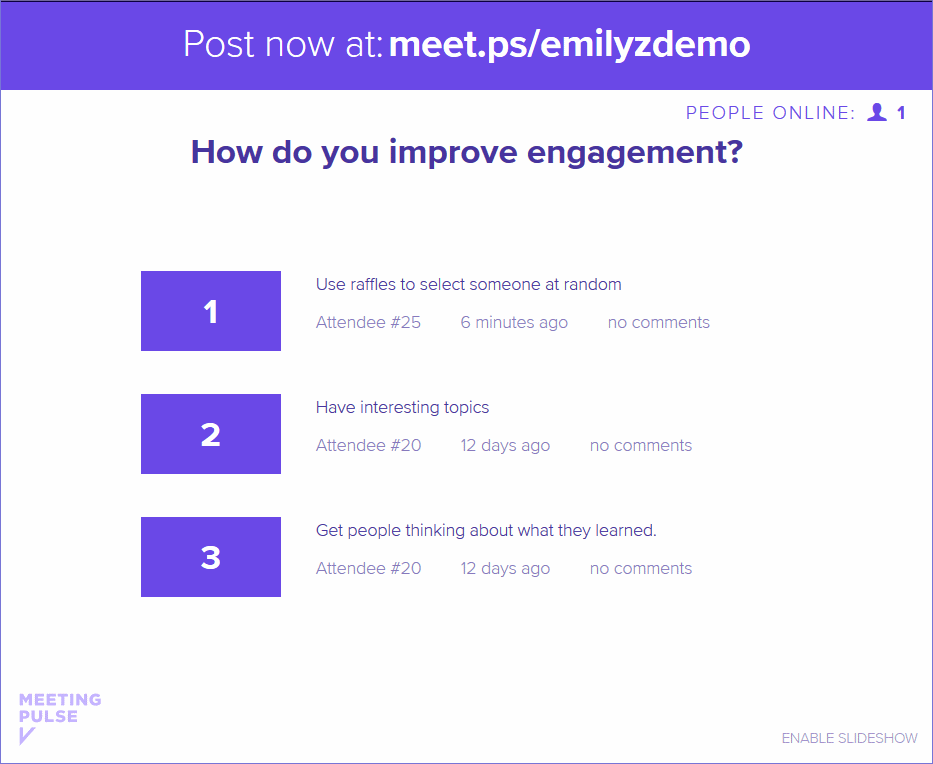 It doesn’t include the details included in the “more information” section.